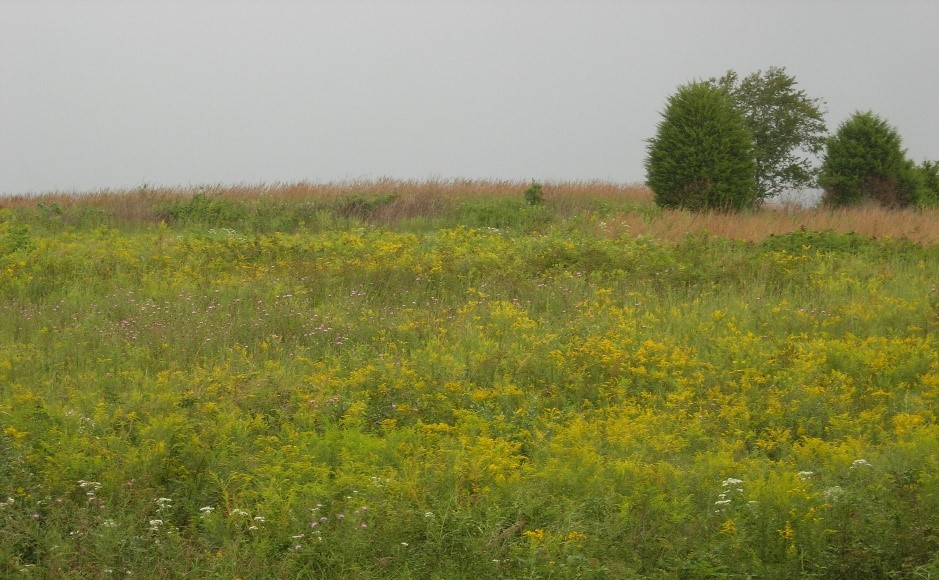 The 32,456-acre Oak Ridge Reservation (ORR) has been protected and relatively undisturbed since its acquisition in 1942 as part of the Manhattan Project. Prior to that time, about half of the land was cleared and cultivated as farms, small communities, and community support, such as churches, schools, stores, etc.  Over the past 60 years many of the cleared areas have gradually returned to forest through plantings and natural succession.  Now about 70% of the ORR is in mature or maturing native plant communities.  However, invasive, non-native plants and animals often impact these areas. Native plants are those plants indigenous to a given geographic region.  In the US, this means pre-European settlement.  Non-native plants do not grow naturally in an area and have been introduced accidentally or intentionally by man.  Invasive plants are non-native plants that are able to self-establish on many sites, grow quickly and spread to the point of disrupting native plant communities or ecosystems, and cause economic and environmental harm.  Of the over 1,100 vascular plant species found on the ORR, approximately 168 species are non-native, and 54 of these have been identified as aggressively invasive.  A 2002 report identified the 18 most problematic non-native species for natural areas (i.e., ORR habitats of rare plants or wildlife).  Invasive plants on the ORR have spread from old home site plantings, well-intentioned erosion control efforts, forage enhancement projects, and adjacent farms or residential property. Roadways, utility rights-of-way and accessible waterways, such as the Clinch River and East Fork Poplar Creek, provide corridors for the spread of these invasive species. A short overview of the invasive plant issue on the ORR is found in the research park brief Invasive Plants on the Oak Ridge Reservation .

The initial Invasive Plant Management Plan was published in 2004 (ORNL/TM-2004/98) and revised in 2011 (ORNL/TM-2004/98/R1).  The most recent update of the Invasive Plant Management Plan was published in 2017 and continues to evaluate the issue on the ORR and define strategies to meet the overall goal of reducing such invasive plants.  A major goal of the plan is to control invasive plants in areas (1) identified as important (e.g. natural areas, areas with cultural resources), (2) where such efforts can make a difference, and (3) that are major routes of dispersal (e.g., roads).

The final goal of managing non-native invasive plants is to restore an area to more natural, native plant communities.  In most cases on the ORR successful eradication of invasive species allows the surrounding native vegetation to spread into the newly opened area and become reestablished.  In some cases, however, especially where extensive monocultures of a particular invasive plant species have become established, more extensive restoration efforts may be required.  Successful treatment and eradication of invasive species (e.g., kudzu) that completely occupy extensive areas may result in large open areas where surface erosion can become a problem before native species have time to become naturally reestablished.  In those cases, species native to the ORR are planted. To assure that restoration is taking place, areas treated for invasive plants are monitored for success, and invasive species are retreated, if needed.  As experience is gained with treatment techniques and optimum timing, treatment strategies for invasive species on the ORR are refined for maximum effectiveness.  An update on the program detailed progress through 2018 and describes plans through 2021. As noted in the management plan, once surveys are done and target species are identified, prioritization of which plants to treat, areas to treat, and treatment methods are the next steps. New infestations which can be handled quickly and easily are a top priority—known as Early Detection/Rapid Response (EDRR).  Examples of this include a small spotted knapweed (Centaurea maculosa) colony beginning in a cedar barren, which was treated and monitored to ensure eradication was successful, and a single colt’s foot (Tussilago farfara) plant along a roadside, which was pulled. Managing established infestations is done by spraying around the outer perimeter and working towards the center. Retreatment of most areas is usually necessary to completely control invasive plants. Monitoring areas post-treatment is vital to ensuring successful control.