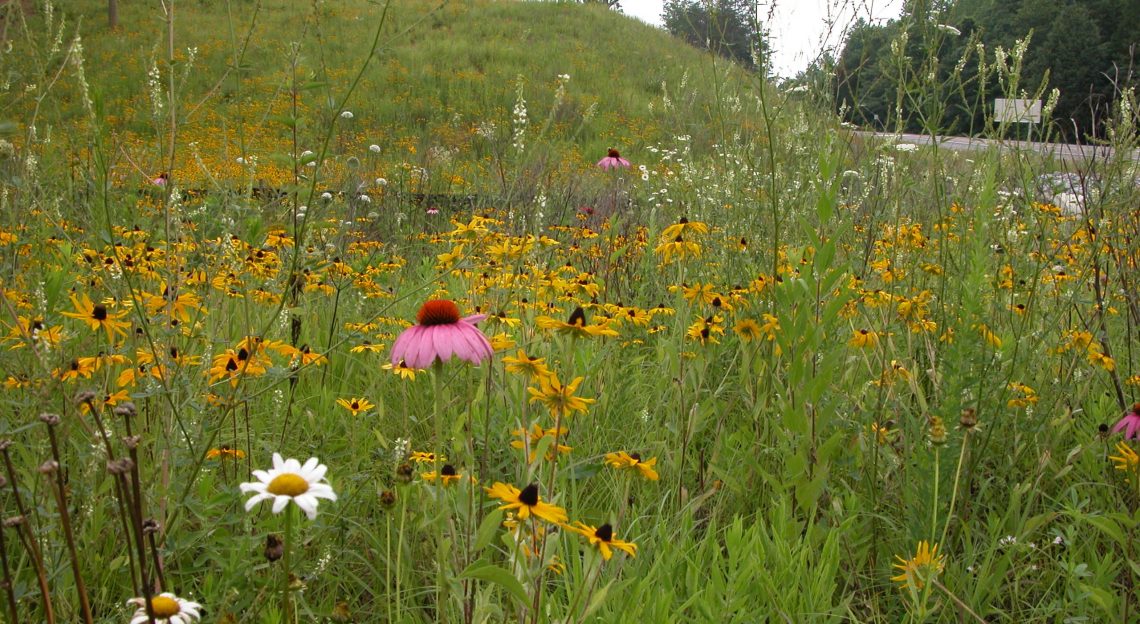 Many research park habitats are managed to protect their ecosystem values, furnish food and shelter for wildlife, and provide sites for research and monitoring. Habitats that receive special attention include prairies, forests, and wetlands and riparian areas.

Native plants are being used in the landscaping at Oak Ridge National Laboratory (ORNL) as a major focal point of the Sustainable Campus Initiative. It is ORNL’s goal to be a forerunner in sustainable landscaping techniques, as well as an example for other DOE sites.

Native plants are better adapted to local environmental conditions and using them highlights their beauty, educates staff and guests about them, and provides a unique look for ORNL. They support native birds, butterflies, dragonflies, and other wildlife some of which are dependent on specific native plant species for food and reproduction. Also, replacing areas planted in fescue with native landscaping is not only aesthetically appealing, it reduces overall maintenance needs.

Much research is being done at ORNL on sustainable landscape techniques. These include using rain gardens to handle stormwater runoff, planting wetland species in detention basins, enhancing vegetation buffers in riparian areas, adding aquatic plantings at the East Campus Pond, and establishing a native grass community on First Street and Bethel Valley Road. The Landscape Management web site provides information on the many projects going on around ORNL.

Many of the natural prairies that once existed in east Tennessee have been lost or degraded as a result of suppression of fires and other disturbances, dumping of debris, development, or invasion by exotic species. The native grasses and wildflowers that grow in prairies provide habitats for wildlife that depend on those plants for cover, nesting, and food. Prairie communities that exist on the ORR include both naturally occurring cedar barrens and actively managed grasslands.

A Native Grass Community Management Plan for the Oak Ridge Reservation (ORNL/TM-2006/149) has been developed to define strategies to convert additional areas on the ORR to actively managed grasslands. Areas under consideration for such change are open habitats, including abandoned fields and rights of way. Two presentations from 2007 and 2010 provide updated information on that program. A third presentation provides information on native grass restoration at Heritage Center, where a controlled burn took place in March 2010.

The ORR includes approximately 24,000 acres (9,712 ha) of relatively unfragmented mature eastern deciduous hardwood forest that provides habitat for numerous wildlife species. Such blocks of forested area are increasingly uncommon in both the region and nationwide.

The ORR is valuable not only for its large size, but also because many of its forest patches are larger than 50 contiguous acres (20 ha). These large patches of forest provide habitat for several plant and animal species not associated with smaller forest patches. This is especially true for certain increasingly rare bird species.

ORR forests are mostly oak-hickory, pine-hardwood, or pine. Minor areas of other hardwood-forest cover types are also found throughout the ORR, including northern hardwoods, a few small natural stands of hemlock or white pine, and floodplain forests.

The forests on the ORR are changing. There are, for example, many dead pine trees due to Southern pine beetle outbreaks and beaver activity. These dead trees provide nesting habitat for animals such as the red-headed woodpecker, a species once listed by the state of Tennessee as in need of management. The first infestations of the hemlock woolly adelgid on the ORR were detected in January 2008. The adelgid literally sucks the life from the tree and can kill it within as little as three years.

A short overview of an ORR ancient forest is found in the research park brief An Old-Growth Forest on the Oak Ridge Reservation.

A short overview of an unique ORR forested area is found in the research park brief The Walker Branch Watershed on the Oak Ridge Reservation.

The approximately 580 acres (235 ha) of wetlands on the ORR provide water-quality benefits, stormwater control, habitat for wildlife and rare-species, and landscape and biological diversity. Wetlands occur across the ORR at low-elevation positions, primarily in the riparian zones of headwater streams and their receiving streams, as well as in Clinch River embayments. Wetlands range in size from several square yards at small seeps and springs to approximately 25 acres (10 ha) at White Oak Lake.

Management activities have recently created additional wetlands on the ORR. These wetlands resulted from actitivies such as development of a water detention basin during construction of new buildings, creation of artificial wetlands as mitigation for impacts to wetlands, and re-establishment of wetlands by curtailing vegetation mowing. The East Campus pond has been greatly modified and is now a more natural area with a walking path around it for staff to enjoy. American lotus has been used in the P-1 pond remediation effort at the East Tennessee Technology Park. These developments provide important additions to the existing inventory of wetlands on the ORR and often reflect a return to the land use conditions that existed prior to the creation of the reservation during the Manhattan Project.

Creating a riparian buffer area (e.g., replacing steep areas of lawn next to a stream with native vegetation) can reduce erosion, minimize energy use, improve water quality, increase biodiversity, create more wildlife habitat, and improve aesthetics. ORNL is creating riparian buffer areas inside the Lab footprint as part of a sustainable landscapes program. These riparian buffers will include a rain garden, a ledge garden, and an area changed from lawn to ecological edge.

A short overview of ORR wetlands is found in the research park brief Wetlands of the Oak Ridge Reservation.

Follow these links to native grass and wildflower internet resources and information on commercial seed vendors.